Gunn-Truscinski Duo at Acme Records and Music Emporium in Milwaukee on April 20, 2018

My last post featured a great set by Steve Gunn performing solo during Record Store Day, and this is the amazingly intense instrumental set he and John Truscinski performed the night before. As you can see from the photos below, the lighting (featuring purple-tinted lightbulbs above the stage at Acme) was a bit on the low side during the performance, but the music is really on fire. 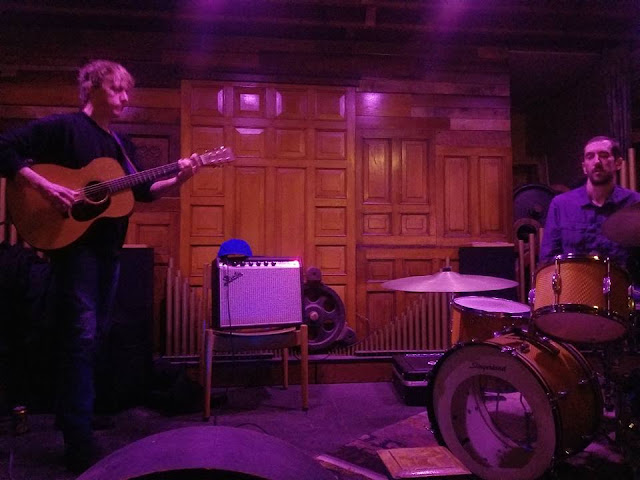 This performance was recorded with explicit artist permission by Richard Hayes using a pair of Beyerdynamic MC 930 microphones (which have a cardioid pickup pattern) and fed into a Tascam DR-70D recorder at 24/96 resolution. Audacity was used to provide very gentle EQ and minimal compression. As I often do with instrumental music, I decided to not break up the pieces into individual files and instead allow the set to stand on its own, which it does with ease.

Please support these fine artists and decent people by going to their shows, buying multiple copies of their merchandise (your friends need the music), and talking to them like they are real human beings after shows. If they don't mind and have the time, of course.

A guide to download formats:
WAV = files which are able to be burned as a CD without any conversion steps. This is the largest size of file on offer here.
ALAC = stands for Apple Lossless Audio Codec, which is a method of making a lossless copy of an audio file with about 60% of the space required with a WAV file. You can natively play these files on any Apple device and enjoy the same resolution and sound quality as a WAV file (it just takes up half as much space on your hard drive or device).
mp3 - this is a lossy compression codec which utilizes psycho-acoustic "tricks" to drop certain audio information which is not noticeable under normal hearing situations. I am not a huge fan of mp3 but still find it useful because a high quality mp3 file will take up about 25% of the room on your storage device compared to a WAV file and about half as much as a ALAC file.