In the closing days of 2016, Rob Noyes seemed to come out of nowhere with his stunning debut release on Poon Village entitled "The Feudal Spirit." Please see this post for more information about him.

He returned this past Spring with a pair of guitarists to enliven our little village near the Lake. Since this was recorded, Rob (formerly based outside Boston) has moved to Japan. There won't be as many opportunities in the Midwest to hear him, and that is a shame. 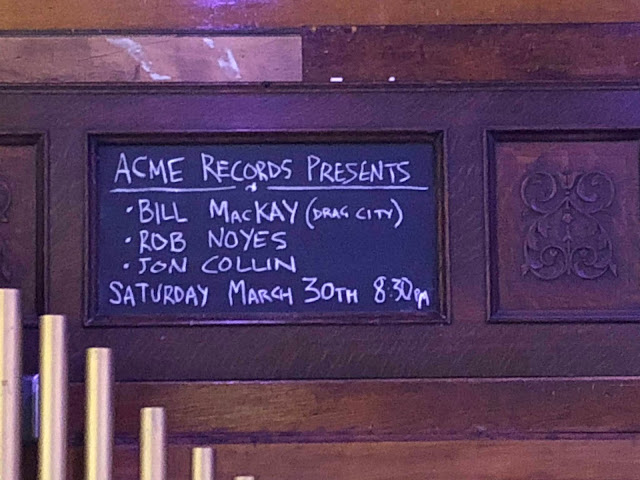 I have tendency to bemoan the quality of the photos I obtain at Acme shows, but at this gig, also featuring Bill MacKay and Jon Collin, my photos of Rob are completely unusable. I should have taken more but I was focusing on the audio recording. If I can find any shots on Facebook from other members of the audience who were there, I will post them.

This recording was made with artist permission by Richard Hayes using a stereo pair of Line Audio CM3 cardioid microphones in ORTF configuration and captured with a Sound Devices MixPre-6 recorder. Audacity was used for very gentle EQ. The recording came out nicely despite the challenges of live recording this performance which featured a very wide dynamic range. I must give a shout out to Line Audio, which produces incredibly high quality hand-made microphones in Sweden. The intent of the company is to produce microphones with as straight a frequency response "line" as possible, and for $20 more than a standard SM58, the quality-value ratio is unbelievable. Plus they are only slightly longer than a standard XLR plug.

Please support this fine artist and decent person by going to his shows, buying multiple copies of his merchandise (your friends need the music -- why aren't you buying music for your friends?), and talking to him like he is a real human being after shows. If he doesn't mind.