The only thing more amazing than Dire Wolves' music is the fact that their lineup is ever-shifting. While not quite the same thing as when Mark E Smith infamously made the point that he and only he was the sine qua non of the Fall ("If it's me and your granny playing bongos, then it's the Fall"), it's close.

Generally there is always Jeffrey Alexander on guitar and usually Brian Lucas on bass. For the last few years or so Sheila Bosco (drums) plus Taralie Peterson of Spires That in the Sunset Rise (vocals, sax and percussion) and Arjun Mendiratta (violin) have been mainstays of touring versions of the band while vocalists Lau Nau and Georgia Carbone have appeared on studio recordings. There have been plenty of memorable one-offs such as last February's performance at NYC's Union Pool with members of Elkhorn, Bardo Pond, and the Sunwatchers -- billed as Dire Wolves (Inspiration Family Band). 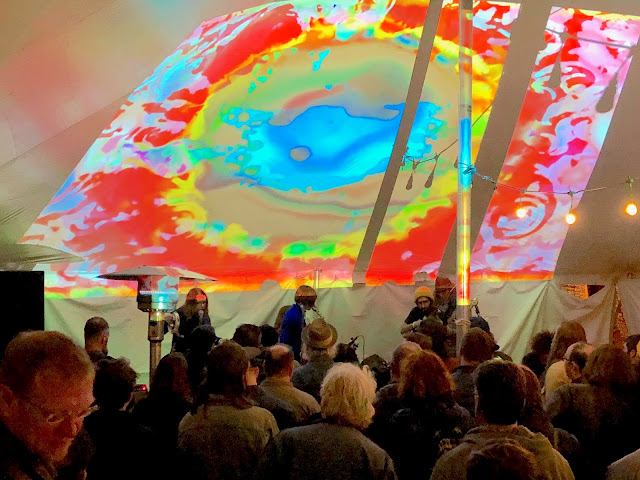 What makes each performance of Dire Wolves so special is a level of free-form improvisation which goes far beyond the category of "psychedelia" or "jam band" and dives right into "free jazz" territory (that's my favorite territory, in case anyone is keeping track at home).

However, I have yet to hear a piece by the Wolves which is not psychedelic or that wouldn't go over very well at a "jam band concert" as an opener for The Dead and Co. or Phish. Sometimes a piece will appear to just be completely improvised, but there is usually a certain sensibility which allows sections of increasingly interesting improvisation to exist within the structure of a pre-existing song. 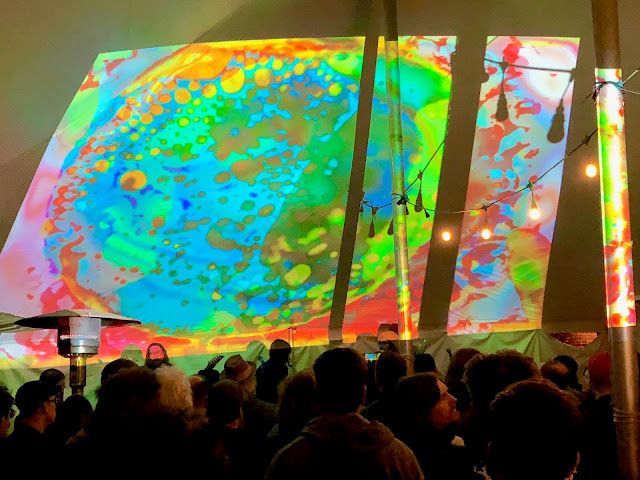 For this show, my understanding is that the choice of a Pharaoh Sanders song ("Elevation" from Sanders 1974 live album of the same name for Impulse!/ABC records) was a last minute decision. If so it was both an inspired choice and a wakeup call for the partiers in the audience up front to stop talking to their friends and pay attention.

Alas, some people are beyond the point of being able to be woken up. Any show in Milwaukee where alcohol has been sold to people primarily interested in meeting people and talking about the Brewers' chances to win the pennant this year will stand as evidence as to why most bands' tours hop from Detroit to Chicago to Madison and Minneapolis. Most of the time the MPF crowd is better behaved, but at this point of the evening there were more than enough socialites around -- enough that Alexander felt the need to shame them for talking during a Pharaoh Sanders song.

At the time, when the band started, I thought they were going to begin playing John Coltrane's "A Love Supreme" because the Brian's bass line was reminiscent of the beginning of that jazz masterpiece. After a few moments it was off into Dire Wolves space and I eventually recognized it as a Pharaoh Sanders song, even if I couldn't identify the exact song (as it happens, "Elevate" is one of the few Sanders albums I don't own).

This set was recorded with the feed from the Soundboard (thanks to Max) fed into my Sound Devices MixPre6 recorder. For some as-yet unidentified reason, probably entirely my fault, the feed from my pair of beyerdynamic MC 930 microphones set up 10 feet in the air on a lightstand next to the mixing board did not record despite there being four channels of signal being displayed on the recorder's screen during the show.

I wound up using an audience source recorded by "Atticus Binch" on what looked to me like a Nakamichi 550 cassette recorder. My taper friend Joel tells me he thinks this might be the owner of a record store in Bloomington, IL. This has not been independently confirmed. The audience source sounded like it was recorded in the front row amidst the talkers and was also rather saturated at certain points. I mixed it at a ratio (SBD:AUD) of 60:40 and used Audacity for compression and EQ. xAct was used to prepare ALAC and mp3 versions.

While not the transcendent audiophile masterpiece I always hope for (and rarely achieve), the final result is much better than I had dared to hope for the day after the festival when I discovered two channels of my recording missing.

Please see below for the SoundCloud stream:

Please support these fine artists and decent people by going to their shows, buying multiple copies of their merchandise (your friends need the music), and talking to them like they are real human beings after shows. If they don't mind.