Elkhorn with special guests at Acme Records and Music Emporium in Milwaukee on April 13, 2019

One of the unexpected effects of having the annual and amazing Milwaukee Psych Fest occurring this year during the same weekend which also contains the hectic shopping day known as "Record Store Day" was that we were treated to afternoon performances by two bands who would be playing at the Psych Fest proper that evening: the always dependably creative and super-psychedelic Dire Wolves, and the powerful guitar duo known as Elkhorn. 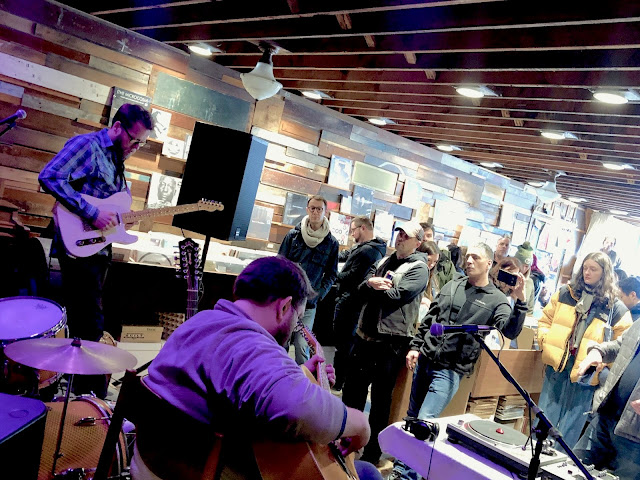 My photo from the mixing area. Note Andrew Lyon in front getting some photos for the blog.

Elkhorn has made a name for itself over the past few years for releasing fascinating albums of great music. They have a sense of humor (one CD collected seven live versions of the song "Lionfish" for those late night compare-and-contrast sessions) and a sense of timing -- two new vinyl releases the week of this mini tour which brought them to Chicago and Bloomington, IN, in addition to the true home of live music in the US (Milwaukee).

photo by Andrew Lyon. Note the guy in back looking unshaven and confused near the mixer.

How to best describe Elkhorn? I'll pull out a trick from my days as a music journalist (and don't for a second think they're not still doing this) -- I'll quote the press materials without shame: "Folk/psych-rock guitar duo featuring Jesse Sheppard on twelve-string acoustic and Drew Gardner on electric, interweaving the extended folk tradition with psychedelic improvisation, moving freely from pre-rock to post-rock, from the 1860s to the 1960s and beyond."  What's missing from the description is that Jesse and Drew have a gift for memorable melodies and a knack for complicating things up until to just before the breaking point before they return to the hook. They are an excellent example of the kind of music that pleases both the casual fan and the elitist critic.

I did not really expect to be the "sound guy" at this show (or at the following Dire Wolves performance) but there was no one else willing or able to do it and i was not going to ask to record a band and then say, "Hey I can't help you, you'll just have to play some chords and then lean over and set the gain on the store's mixer. While I watch."

So, I was the sound guy. I had a pair of Beyerdynamic MC930 cardioid microphones in an ORTF stereo configuration up front on stage about 18 inches in the air to capture the acoustic sound of the guitar as well as some of the players on stage during the song with special guests. I obtained a stereo feed from the mixer which was identical to what was being fed to the speakers. These were recorded with the amazing Sound Devices MixPre6 in 24bit/96kHz glory. I mixed these four channels in Audacity to form what is known (incorrectly) to tapers as a "matrix" recording. A few small moments of silence between songs were removed with care in Audacity and xAct was used to encode into ALAC and mp3 formats.

As my photo below will attest, Jesse and Drew asked a couple of the members of Dire Wolves to perform on the last song. It was a great moment of controlled chaos and I thought it was incredible that they were able to produce such beauty together.

Please support these two superb musicians and excellent human beings by seeing their live shows, buying multiple copies of their great merchandise (your friends are starving for great music -- why aren't you buying them music?), and talking to them respectfully after shows. 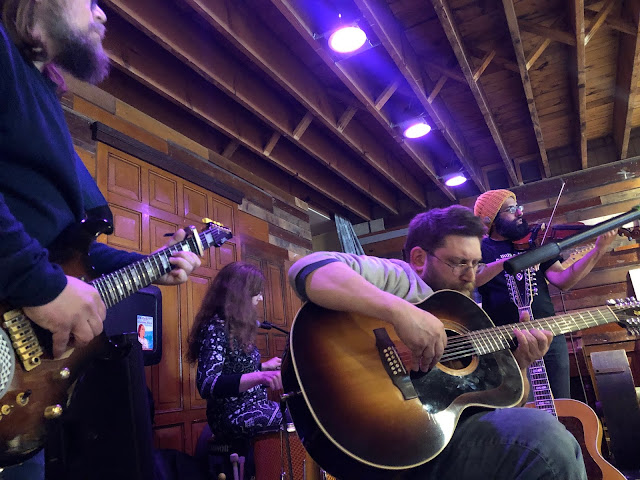 16bit, 44.1kHz ALAC file (216 MB)
a lossless, full resolution  file which can be used to burn a CD or to listen to on an iPhone or other Apple product