James Elkington at Acme Records and Music Emporium in Milwaukee on July 7, 2018

James Elkington is a superb guitarist who has frequently performed and toured with the likes of Joan Shelley, Steve Gunn, and Jeff Tweedy. A few years back he and Nathan Salsburg (another cohort of Joan Shelley) released an excellent duo instrumental album on the Paradise of Bachelors label.

However, just about a year ago he briefly dropped the mantle as a fingerpicking hero to release an album, Wintres Woma, featuring affecting folk songs with seemingly straightforward lyrics and simple melodies all built on a shifting foundation of brilliant and complex guitar work. 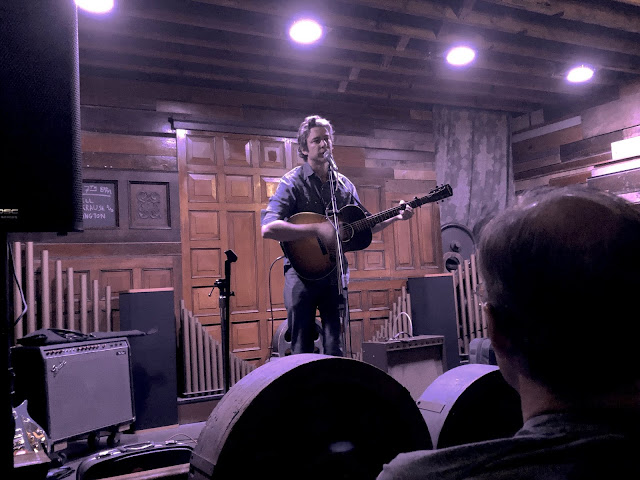 His performance at Acme, supporting Jake Xerxes Fussell was a delightful experience for the packed crowd of music lovers. At one point he told the crowd that we were lucky to have Acme Records in Milwaukee (a sentiment echoed by Steve Gunn last year when he announced that Acme was his favorite record store in the US) -- I feel fairly confident to state that the audience felt quite lucky to be there listening to him.

This recording was made by Richard Hayes with explicit prior permission from James Elkington as well as Acme Records.

I captured the audio of the performance utilizing a matched pair of hand-made Church Audio CA14 cardioid microphones which were fed into a Church Audio CA9200 preamp and recorded with a Roland R-05 recorder. I also recorded a soundboard feed and these two sources were blended in Audacity, split with Fission, and converted to ALAC and mp3 using xAct.

Please support this superb musician and excellent human being by seeing his live shows, buying multiple copies of his merchandise (your friends are starving for great music), and talking to him respectfully after shows.

A quick guide to download formats:
WAV = files which are able to be burned as a CD without any conversion steps. This is the largest size of file on offer here.
ALAC = stands for Apple Lossless Audio Codec, which is a method of making a lossless copy of an audio file with about 60% of the space required with a WAV file. You can natively play these files on any Apple device and enjoy the same resolution and sound quality as a WAV file (it just takes up half as much space on your hard drive or device).
mp3 - this is a lossy compression codec which utilizes psycho-acoustic "tricks" to drop certain audio information which is not noticeable under normal hearing situations. I am not a huge fan of mp3 but still find it useful because a high quality mp3 file will take up about 25% of the room on your storage device compared to a WAV file and about half as much as a ALAC file.