Tashi Dorji and Tyler Damon at Acme Records and Music Emporium in Milwaukee on September 14, 2017 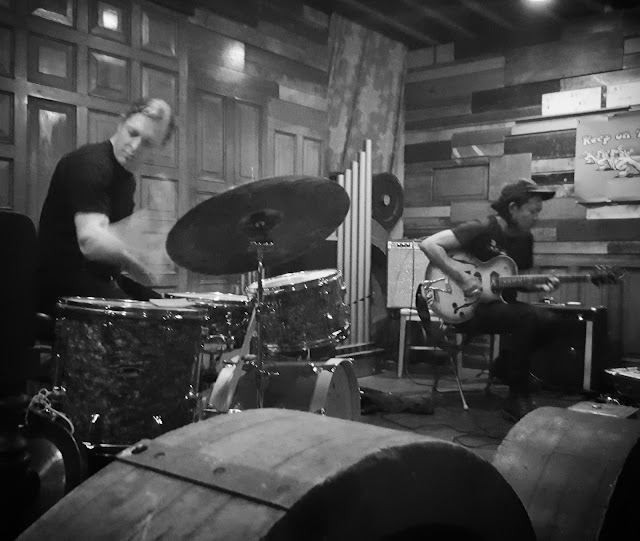 I first got into Tashi Dorji's playing after I came back from an amazing 8-day trip to Bhutan in early February 2014. My wife and I visited that unbelievably beautiful Himalayan kingdom with a group of about a dozen people including Ajahn Brahm, a Buddhist monk in the Theravada tradition who provided us with two Dhamma talks per day to go with our meditation sessions and trips to Buddhist monasteries and nunneries. We went back and forth between Paro City and Thimphu, probably the two best known cities in Bhutan, and visited the famous Tigers' Nest monastery.

While in Bhutan I asked one of our guides for a chance to purchase CDs or cassettes of Bhutanese music. Given the near-ubiquity of Bollywood soundtrack songs in that part of the world, the guide approached this request with the look of being asked to find a rare and endangered animal.

Eventually after much effort I found two CDs of local music, but thought there must be more to Bhutanese music than that. I checked out Bandcamp by entering the word Bhutan into the tag search engine, and one of Tashi Dorji's first cassette-only releases appeared on the screen. Imagine my surprise when I listened to it and heard a vastly talented and creative acoustic guitarist who was using the acoustic guitar in very unconventional ways and even at times channeling the late Derek Bailey. It took me about 5 seconds to purchase it and start looking for more by the musician, born in Bhutan but currently living in North Carolina.

"This," I thought, "Is amazing music, and no one is going to like it except me and maybe 4 or 5 other crazy people."

I eagerly awaited each new release from Tashi, moving from a few more self-released cassettes to cassettes on limited-edition boutique labels, and finally onto slightly more stable super-indies like Family Vineyard and VDSQ. I quickly became his friend on Facebook (to this day, the only person I have ever asked to be a friend on FB whom I have not yet met in real life) and patiently watched his tour schedule slowly drift away from his native North Carolina. Once or twice he barely made it up into the midwest, in places like St Louis or Champaign-Urbana, and I fantasized about traveling to those shows. I would keep buying his music and checking out his soundcloud feed (see below). A year or so later, there was a tour he was on with the legendary guitarist Marisa Anderson, but he stopped his leg of her tour just before she came to perform at Acme. Drats! 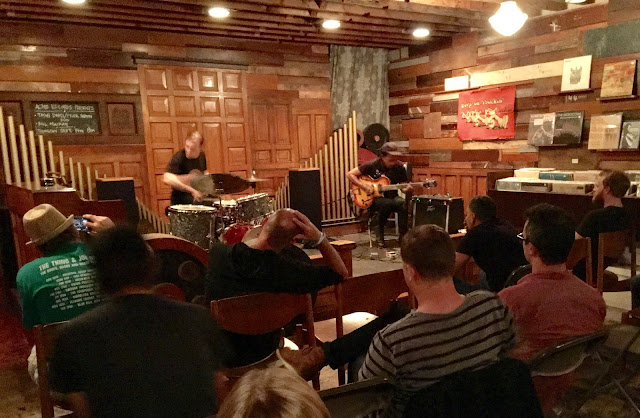 Finally, in early April 2017, Tashi together with drummer Tyler Damon made their way to Milwaukee, performing at the venerable Acme Records. That night was a stunner. The energy level in that room was higher than it was possible to measure. I was so happy that others in Milwaukee were getting to know these two musicians.

I was surprised and delighted when I learned that Shopkeeper Ken had asked the pair to return on their next trip through America's Dairyland. Again we have a very powerful performance which somehow does not sacrifice beauty to the altar of overwhelming sonic delivery.

I've gone on and on about Tashi, but that is mostly because I have a much more interesting story to tell than the one about Tyler, who is fantastically gifted and quite active (check out his website below), but without any exotic back story. He is fully qualified to knock you over out of your seat with power, but in my opinion he really shines when he is using bells and hand percussion as well as extended techniques such as scraping the cymbals with the end of the drumstick.

The original mix I was working on for over a week (in my spare time of course) was captured using a pair of modified audio-technica AT853 microphones at the back of the room, on stands about 9-10 feet in the air. However, I was unhappy with the balance of instruments in that feed and felt that from that perspective, Tyler's contributions were not as "up-front" as I would like. I experimented with mixing sources but soon found out the problems inherent in that approach (basically, the internal clocks on different recorders are not synced, and the two sources keep drifting away from each other. Plus there are phase issues to contend with).

Eventually, I decided on going with the recording which used a pair of small Church Audio mics up on stage, attached to the music stand on the piano and pointed directed at Tyler's drum kit with Tashi's amp directly behind him. 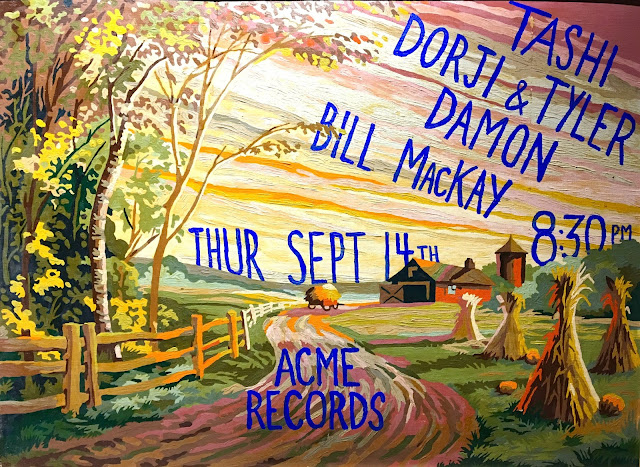 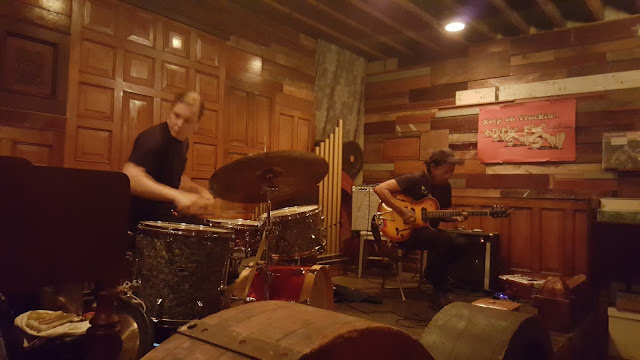 This recording was captured by Richard Hayes using a pair of Church CA-14 microphones (cardioid) which were placed on top of the unused piano (see photos) and fed into Church CA-9200 preamp and recorded with a Roland R-05 recorder at 24/44 resolution. Audacity was  used to clean up the sound a little. I decided to not use Fission to split the performance into three tracks, because in my opinion it flows well enough to be considered one long freely improvised piece... Conversion into ALAC and mp3 were accomplished using xAct.

With many thanks to Robert Szocik for the excellent lead and final photo above.

A guide to download formats:
WAV = files which are able to be burned as a CD without any conversion steps. This is the largest size of file on offer here.
ALAC = stands for Apple Lossless Audio Codec, which is a method of making a lossless copy of an audio file with about 50% of the space required. With any apple device such as iPhone or laptop, you can natively play these files and enjoy the same resolution as a WAV file (it just takes up half as much space on your hard drive).
mp3 - this is a lossy compression codec which utilizes psycho-acoustic "tricks" to drop certain audio information which is not noticeable under normal hearing situations. I am not a fan of mp3 but still find it useful because a high quality mp3 file will take up about 20% of the room on your storage device as a WAV and about half as much as a ALAC file.