Jim Warchol at Acme Records and Music Emporium in Milwaukee on July 8, 2019

Jim Warchol brought his guitar and effects board to Acme Records this evening in support of Derek Monypeny. Jim's solo work is always worthy of attention, but this performance was particularly notable for his addition of samples of short wave radio recordings to his "guitar cloud."

I was talking to Jim recently and we both agreed that it is very difficult to use words to describe music, especially when trying to describe it to someone who has never heard it. That's why I started to use Soundcloud to host files for people to stream the music.

We are very fortunate to have Jim in Milwaukee. He has a wealth of talent but also a willingness to discuss music and share his candid opinions. A performance with his band Dryhouse Ruins from later in July will soon be up here for general perusal. 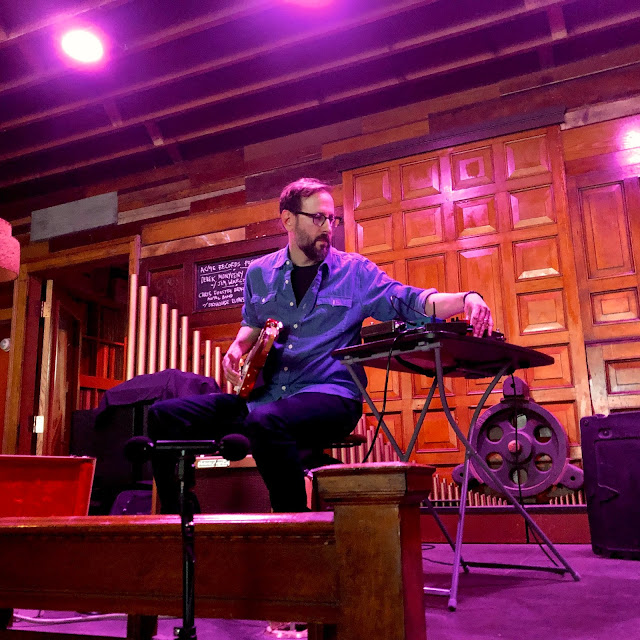 Check out the Superlux S502 (ORTF) stereo microphone at the stage lip in this photo. This is a Chinese-made "clone" of the Schoeps MSTC 64G ORTF stereo microphone, but at much less than one-tenth the price. Obviously it is not as impressive as the Schoeps, but it is starting to attract a cult following among some tapers. My experience is that the mic sounds very good at everything up to about 110 dB, after which the low end starts to disappear and the high end crumbles. At normal Acme Records sound pressure levels, it shines.

The ORTF stereo configuration was invented by the engineers at the French national television and radio system. It is intended to mimic the placement of human ears and does a very good job -- listening on headphones is especially enjoyable.

I used my Sound Devices MixPre6 to record the show. Sound Devices is a world-renowned digital recorder manufacturer located a few miles outside Madison, WI. If you've seen a Hollywood movie (or an episode of Game of Thrones) you've heard audio recorded on a Sound Devices recorder. Not my model, of course!